In the five-year span from 2008 to 2012, inclusive, I managed to stumble through severe depression and anxiety attacks to turn in just two actual professional paying gigs, both short stories. It was a generally miserable time I’ve gone on about elsewhere, and that’s all the literary good that came out of it finished. Two short stories.

In the first four months of 2013, I’ve handed in four professional paying gigs, and I’m not done yet.

The first new thing coming to market is my short story “The Effigy Engine,” which will be in the anthology FEARSOME JOURNEYS, edited by the awesome Jonathan Strahan. His own blog post about the book can be read here. It includes a table of contents; this will be the first time I’m appearing jointly in print with my beloved partner, Elizabeth Bear, and with   my friend Saladin Ahmed. Not to mention an amazing lineup including Ellen Kushner, Ellen Klages, Daniel Abraham, KJ Parker, Kate Elliot, and more.

“The Effigy Engine” is the first in what I hope will be a long series of tales of the Red Hats, a very small band of specialist mercenaries in a black powder/sorcery world chock full of imperial ambitions. The Red Hats, a tight-knit pack of lunatics, misfits, and idealists, somehow always manage to find themselves in the service of the smaller, weaker party in any given disagreement. I suppose they’re in no small way inspired by Glen Cook’s Black Company, though they are decidedly not a structural or thematic copy, nor any sort of artistic response to Cook’s work. I like the Black Company just fine as the Black Company.

For my literary presumption, I was rather startled to learn that Cook himself would be appearing in FEARSOME JOURNEYS, with a Black Company story, no less. Thus the brash young upstart soon finds himself taken to school.

I hope you like “The Effigy Engine” anyway. Here’s an excerpt:

As I peered into the mess, the forward portion of the legionary column exploded in white smoke. Sparks and chips flew from nearby rocks, and I felt a burning pressure between my eyes, a sharp tug on the strands of my own magic. The practical range of sorcery is about that of musketry, and a fresh reminder of the fact hung dead in the air a yard from my face. I plucked the ball down and slipped it into my pocket.

Somewhere safe and cultured? Well, there was nowhere safer for Rumstandel than three feet to my left. I was doing for him what the troublemaker on the ground was doing for the legionaries. Close protection, subtle and otherwise, my military and theoretical specialty.

Wizards working offensively in battle have a bad tendency to get caught up in their glory-hounding and part their already tenuous ties to prudence. Distracted and excited, they pile flourish on flourish, spell on spell until some stray musket ball happens along and elects to take up residence.

Our little company’s answer is to work in teams, one sorcerer working harm and the second diligently protecting them both. Rumstandel didn’t have the temperament to be that second sorcerer, but I’ve been at it so long now everyone calls me Watchdog. Even my mother.

I heard a rattling sound just behind us, and turned in time to see Tariel hop down into our rocky niche, musket held before her like an acrobat’s pole. Red-gray dust was caked in sweaty spirals along her bare ebony arms, and the dozens of wooden powder flasks dangling from her bandolier knocked together like a musical instrument.

“Mind if I crouch in your shadow, Watchdog? They’re keeping up those volleys in good order.” She knelt between me and Rumstandel, laid her musket carefully in the crook of her left arm, and whispered, “Touch.” The piece went off with the customary flash and bang, which my speech-sorcery dampened to a more tolerable pop.

Hers was a salamandrine musket. Where the flintlock or wheel mechanism might ordinarily be was instead a miniature metal sculpture of a manor house, jutting from the weapon’s side as though perched atop a cliff. I could see the tiny fire elemental that lived in there peering out one of the windows. It was always curious to see how a job was going. Tariel could force a spark from it by pulling the trigger, but she claimed polite requests led to smoother firing.

“Damn. I seem to be getting no value for money today, gents.” She began the laborious process of recharging and loading.

“We’re working on it,” I said. Another line of white smoke erupted below, followed by another cacophony of ricochets and rock chips. An Elaran soldier screamed. “Aren’t we working on it, Rumstandel? And by ‘we’ I do in fact mean—“

“Yes, yes, bullet-catcher, do let an artist stretch his own canvas.” Rumstandel clenched his fists and something like a hot breeze blew past me, thick with power. This would be a vulgar display.

FEARSOME JOURNEYS launches in multiple formats on May 28, 2013. 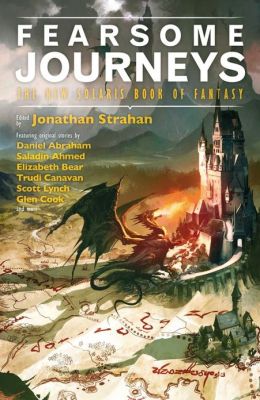 2 thoughts on “An Excerpt from “The Effigy Engine””