So, as promised, here are a few scanned maps from Ye Olden Days (2002-03) when what would eventually become The Lies of Locke Lamora was in what you might call active gestation… but damn, there was so very far to go. These are the sorts of things I would doodle night after night in a 24-hour family restaurant in St. Paul, MN, nursing my Diet Coke and trying desperately to feel competent. 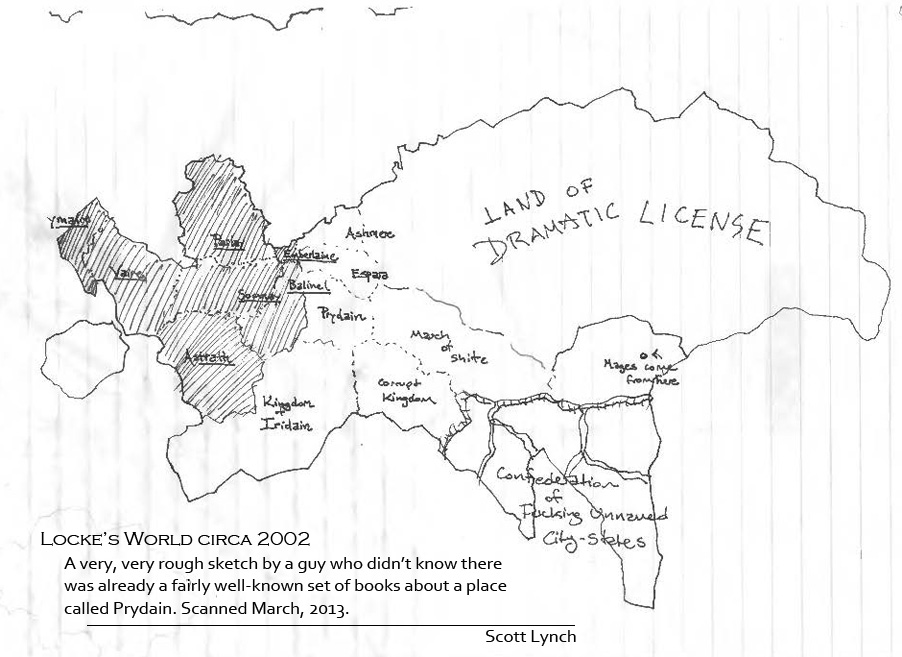 At this point, I was still trying to launch the story via the plot elements that are set to emerge in The Thorn of Emberlain, the Vadran civil war in the Kingdom of the Seven Marrows. Strangely enough “March of Shite” and “Confederation of Fucking Unnamed City-States” did not catch on in later drafts of the background material. 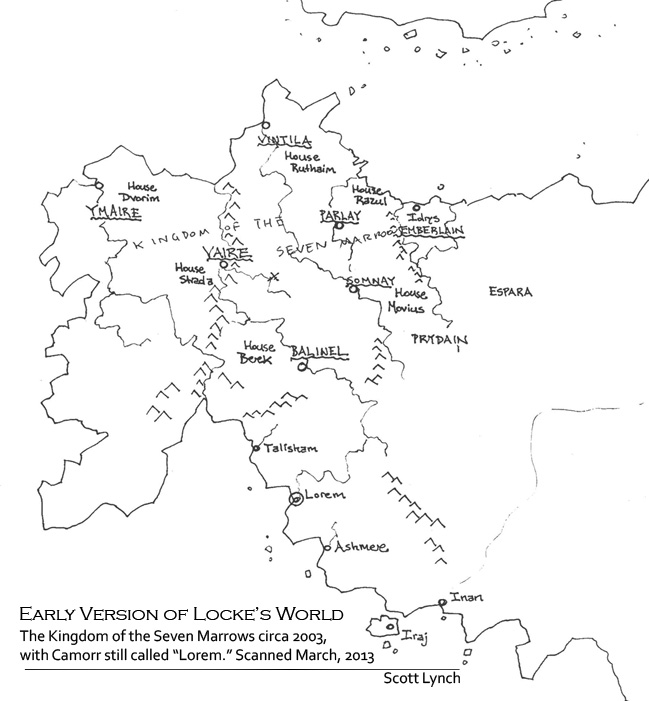 This is closer to what eventually stabilized as Locke’s reality, though it’s vertical where the final version is horizontal and it’s on the wrong continental coast. Camorr, believe it or not, was originally called “Lorem,” which I thought of as just a nice elegant made-up word. I had not yet been introduced to the concept of “lorem ipsum” placeholder text.

This poor, torn-up, soda-stained map represents the oldest surviving recognizable version of Camorr, back when it was still Lorem, and back when I thought I had to have chintzy names for every last brothel on the waterfront. Some of the final elements have begun to gel… the lagoons and the generally nautical/hydrological nature of the city, as well as the vast towers linked by cables. Aspects of Venice were eventually incorporated into Camorr to flesh it out logically; it was not originally conceived as a straightforward analog of any sort. I honestly wish I could remember when my intent finally shifted for good from the epic wars in the north to the more intimate problems of Locke and Camorr… but it’s one of those things that is lost to the warm Jell-O salad of memory.

5 thoughts on “These Maps Are Not the Territory…”